The end of 2019 and the start of a continuous run

After moving into our new place, painting, cleaning, and several trips to the tip and Vinnies, I have finally managed to get the most important part of the move complete: relocating the trains to their new home. 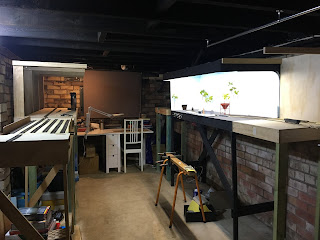 The extra space under the house has allowed me to extend Mt Wilson yard on the right-hand side for the enlarged fruit siding I mentioned in the previous post, as well as turning the coal road into a through-siding. Not sure if this means that I'll remove one of the uncouplers on the Mt Wilson yard yet. Will see how I go. 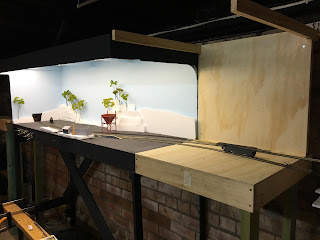 I've also built another mini-scene that I wanted with a bridge and an apple orchard to give the impression of distance between Mt Wilson and Bell. 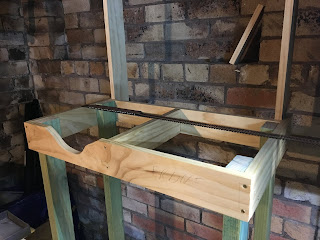 Opposite Mt Wilson I've built a new module which will eventually be another small station (see first photo). This leads into the fiddle yard traverser. I'm planning on leaving that one as bare timber with just a straight track over it for the time being so that I can play around with the track plan between now and whenever it gets built. Overall this new arrangement gives me a longer run, and a continuous run for the days when I just want to watch a train run through the scenery.

After the silly season I'm planning on building the two half-loop modules built so that I can have a continuous run. The goal is to have a train running in a loop before I go back to work in mid-January. There will be much heraldry and fanfare here if that does happen. Plus, the long-awaited SDS 81 class is due in the first quarter of next year and I'm keen to get that out and stretching it's legs.

Until next time, Merry Christmas! Thanks for following along this year, and I look forward to seeing you in 2020, As always, hopefully with more modelling.