Rozelle Street finds a new home, and a layout update

I am currently sitting at home with the flu.

It's truly horrible, but it does give me time to update the blog for the first time in a while.

Some big news in March was that I sold Rozelle Street. It's since been collected by it's new owner and now lives in southern NSW. I believe he's going to extend it a little and add some more details, but it's nice to see it go to a good home. My wife was telling me that I'll regret selling it but to be honest, I hadn't been running it at all since Mount Wilson has been up and running, and I'd rather the layout went to a new home while everything is in good working order and the quality of the scenery is still contemporary. No regrets so far! 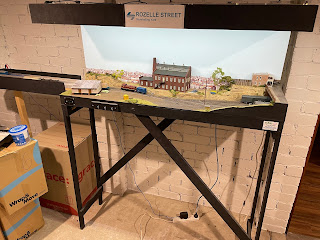 The CH hoppers I'd sent off to Rob Arsenault in Canada to weather also returned in March. This is a weathering job I wasn't going to get to myself anytime soon and I wanted to enjoy using these hoppers on the layout this year before we have to pack up the house again for the next move.
I had originally sent the 8 hoppers to an Australian modeller who weathers mainly modern era stuff, and while he produces great effects on modern Hunter coalfields gear and locos, I just wasn't happy with the overall result. No real fault of his, and I probably could have been a lot more specific too. Lesson learned.
So I sold all 8 of the hoppers, bought 8 more to replace them and got in touch with Rob, whose work I've been following ever since he weathered some NSW stuff for another modeller. If you haven't seen his website it's worth checking out. The service was some of the best I've experienced in 20+ years in the hobby and while the postage cost from here to Canada is eye-watering, the end result was worth it. 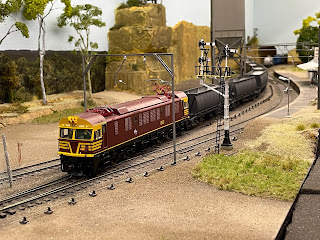 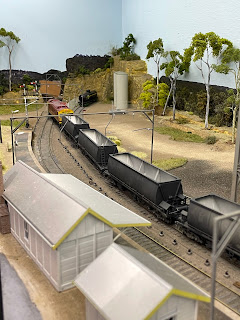 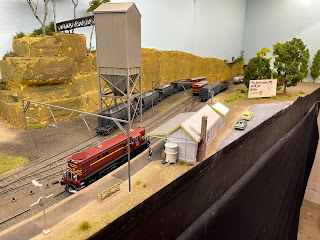 I also took the opportunity to get out the 73 after a long hiatus and do some trip train running from the new mine off stage to the right-hand side to the 'old loader' at Mount Wilson. 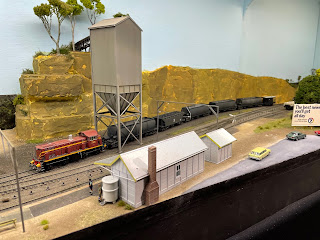 At the Rosehill exhibition I picked up a VW T2 Kombi van that I've been looking for for a while to act as the fettler's van. I've seen photos of a VW T2 Kombi in PTC service at Dubbo in my era, which was all of the justification I needed. The fettlers are AndIan models figures, painted by Jurgen Engels. 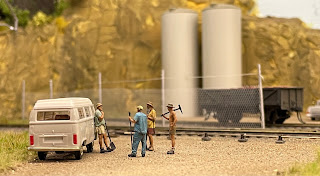 Anyway, aside from that, I've just been enjoying running trains of late. 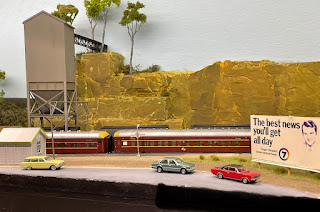 I'm taking some leave soon to finally finish installing the overhead wiring. Along with the fuel depot and some more detail in the co-op siding, I think that'll be in on Mount Wilson for a while. Who knows, when it comes to move again, I may up selling it too. More to ponder on that one.
Cheers,
Ben