Finally I have something new to add.

This week I built the traverser. For anyone wanting to make a similar one, the frame is built from ply on the ends and top, and 65x12mm dressed-all-round pine. The frame is 1450mm x 450mm, with the left-hand entry being 250mm long and the right-hand one 200mm.

The table itself is 40x18mm DAR pine and ply on top, and measures 350mm x 990mm. I bought 300mm drawer runners from this company online and received them by courier within a week for about $27 all up.

Here it is with the table fitted, showing the construction 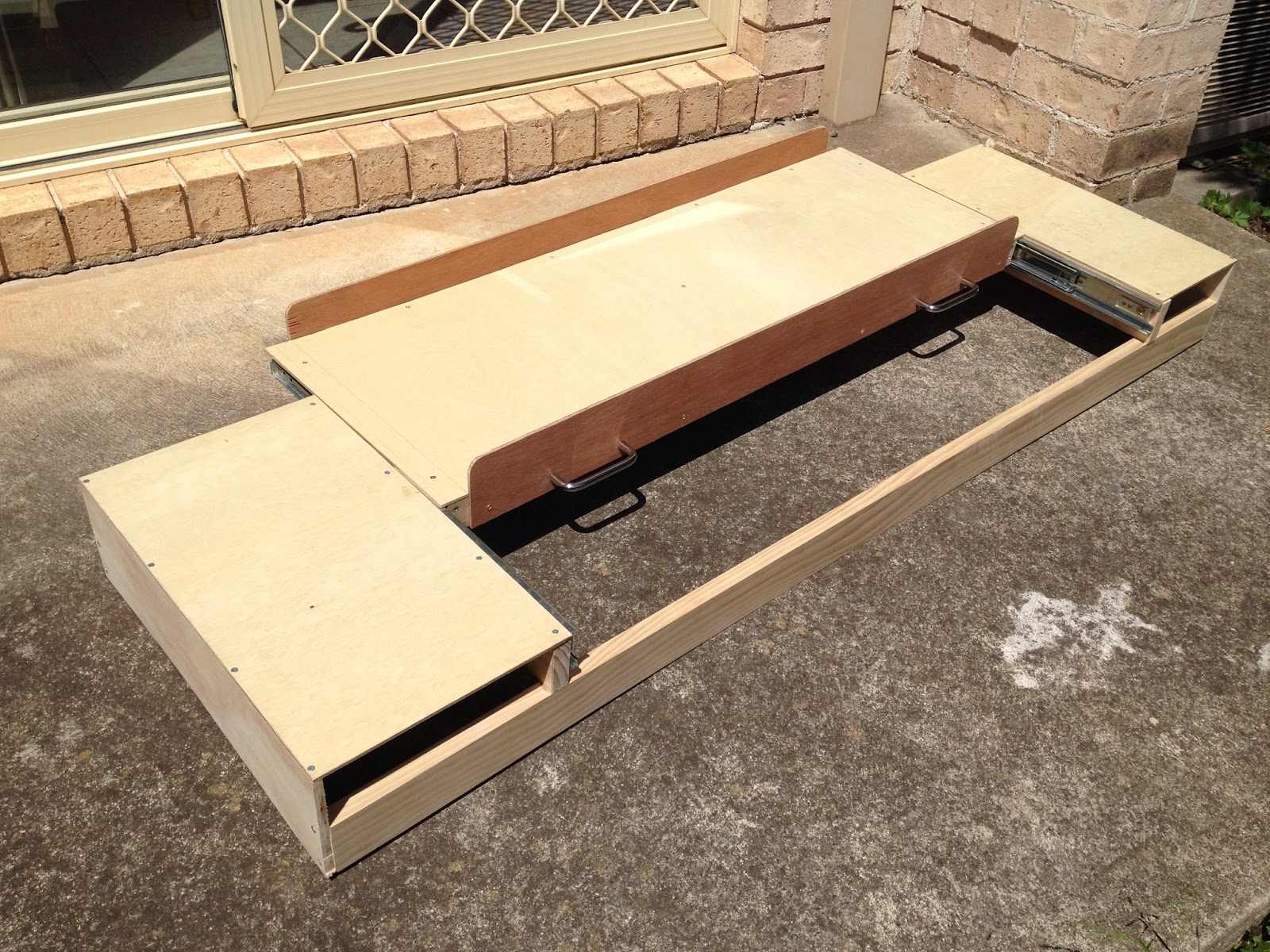 The handles were from Bunnings and just add a nice finish. 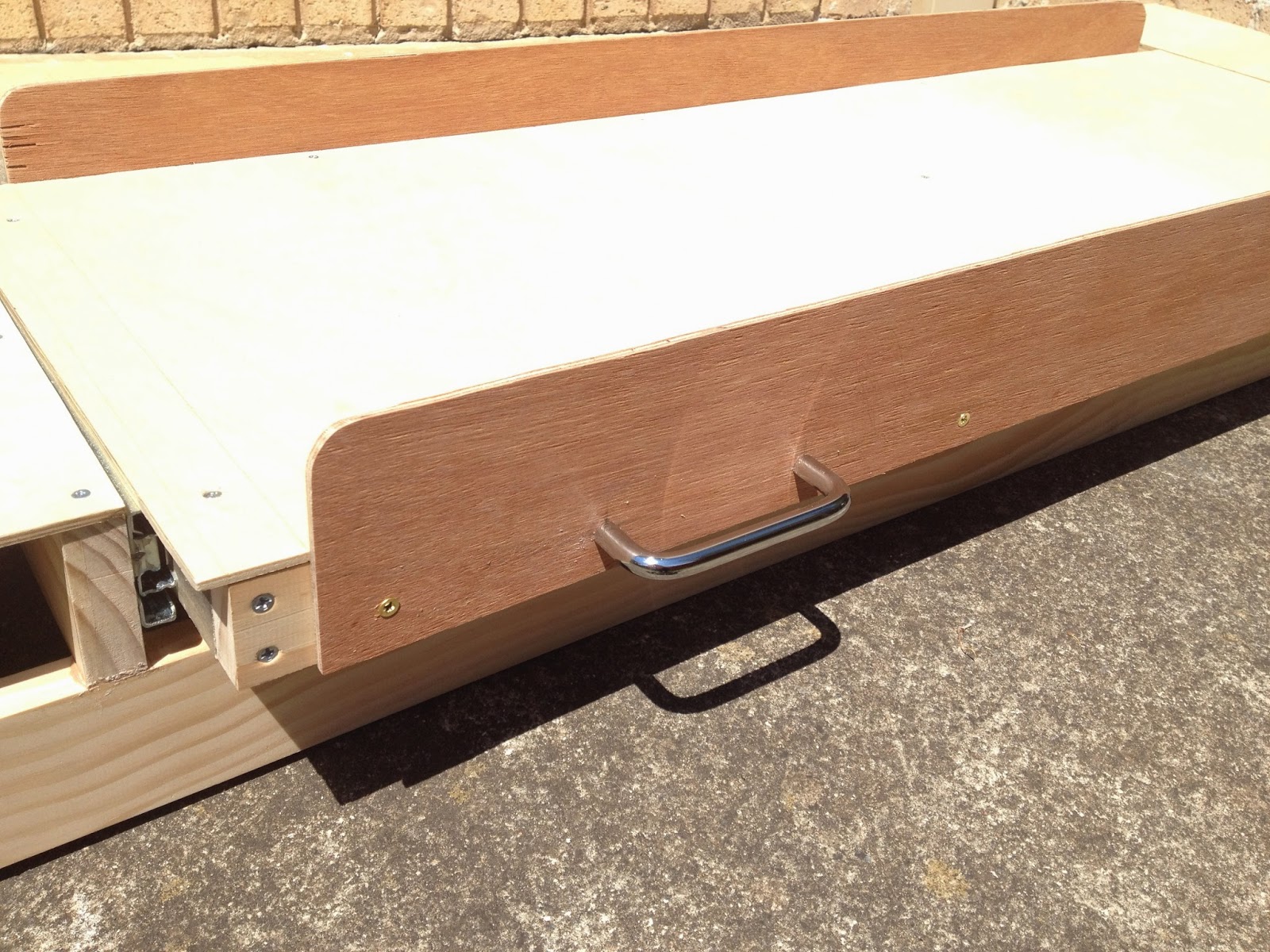 I bought fully-extending drawer slides to maximise the traverse of the table and get as many roads as possible onto it. Part of this involved building the table one road-width wider than the drawer slides. As you can see in the picture above, the outer slide is affixed to the frame and the table is affixed 50mm from the end of the inner slide.

In the picture below, the table is fully extended out. When installed, the entry road will align parallel with the inner right-hand side of the table. 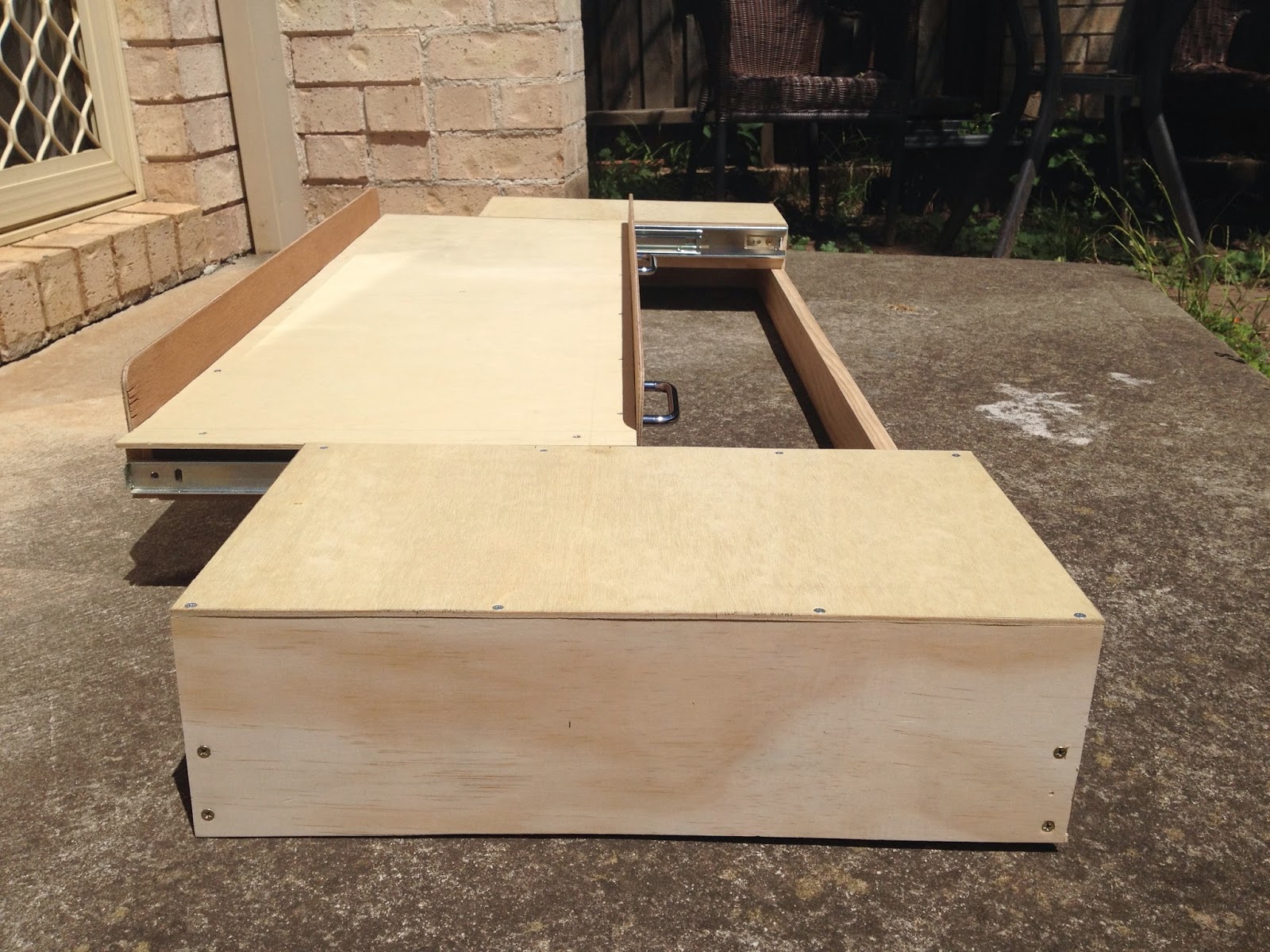 Once the drawer slides are fully closed, you can see that the entry road now aligns with the inner left-hand side of the table. 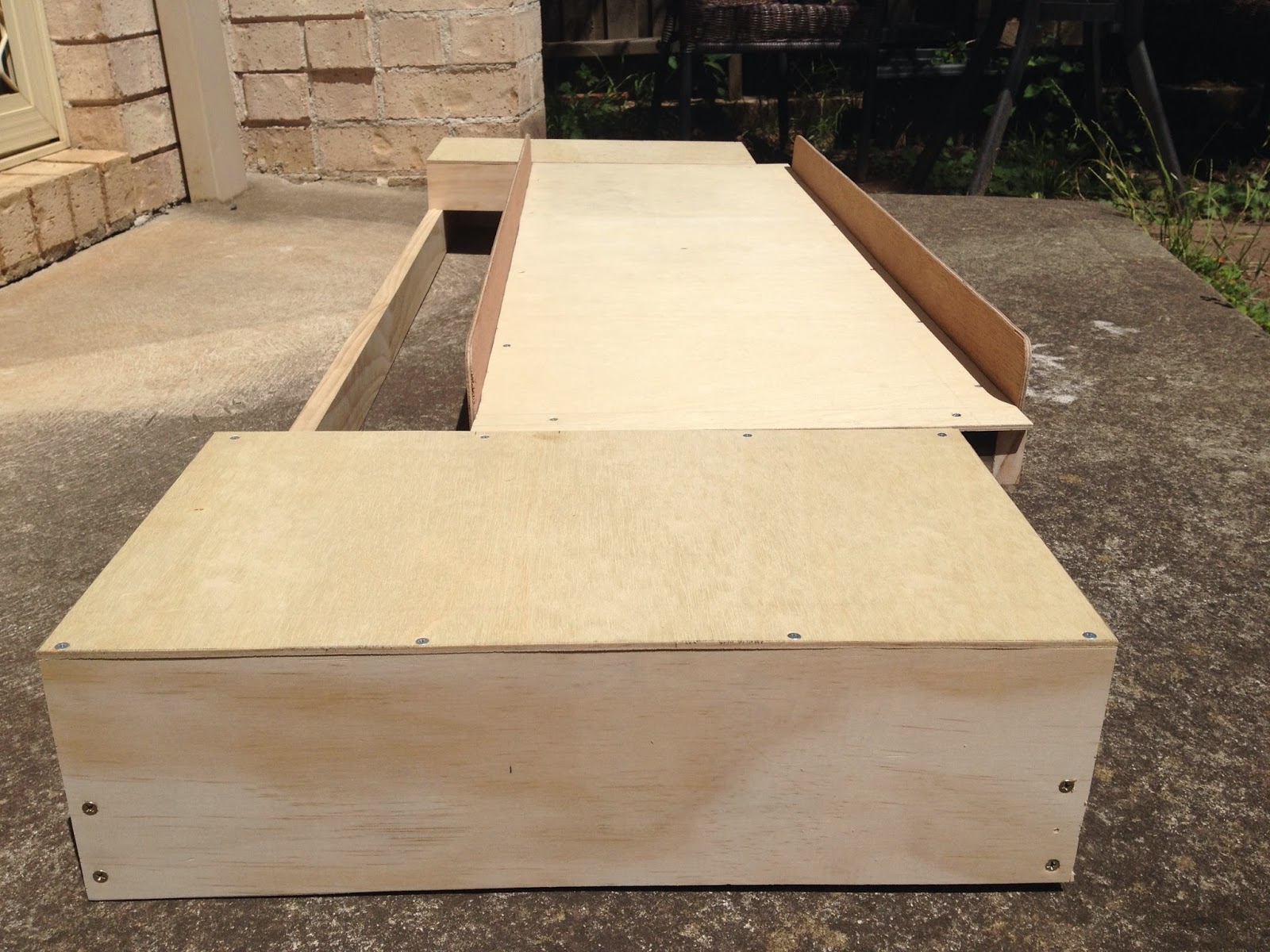 Pretty straight forward idea, derived from a lesson learned on my previous layout where the drawer slides I bought from Ikea only allowed for a 200mm traverse, despite being 300mm long.

Next job is to build the legs for this, and the right-hand return loop. Both should be fairly quick jobs, so it won't be long before there's some more permanent track down and I can move from carpentry to modelling.

Progress photos were promised, and I'll come to that in a bit. For now, I just wanted to give a quick review of the 2014 AMRA Exhibition at Liverpool.

I went with the super-keen Saturday crowd, queuing up at 8.30 on Saturday, and making a beeline for Austrains when the door opened. With both them and Auscision promising sales it was a bit of a gamble, but after seeing a weathering demonstration by Aaron Denning at the Thronleigh exhibition I wanted to get another pack of WHX hoppers, which I did - $110 for four! Pretty happy with that, but weathering will come after I get an airbrush in a few months once the track is down.

The surprise Auscision locomotive was revealed as being the 421, and the samples certainly look the goods. Although they fit my era, I've always seen them as out of my loose conformance to a western/north-western division theme. In the display case they shall stay. 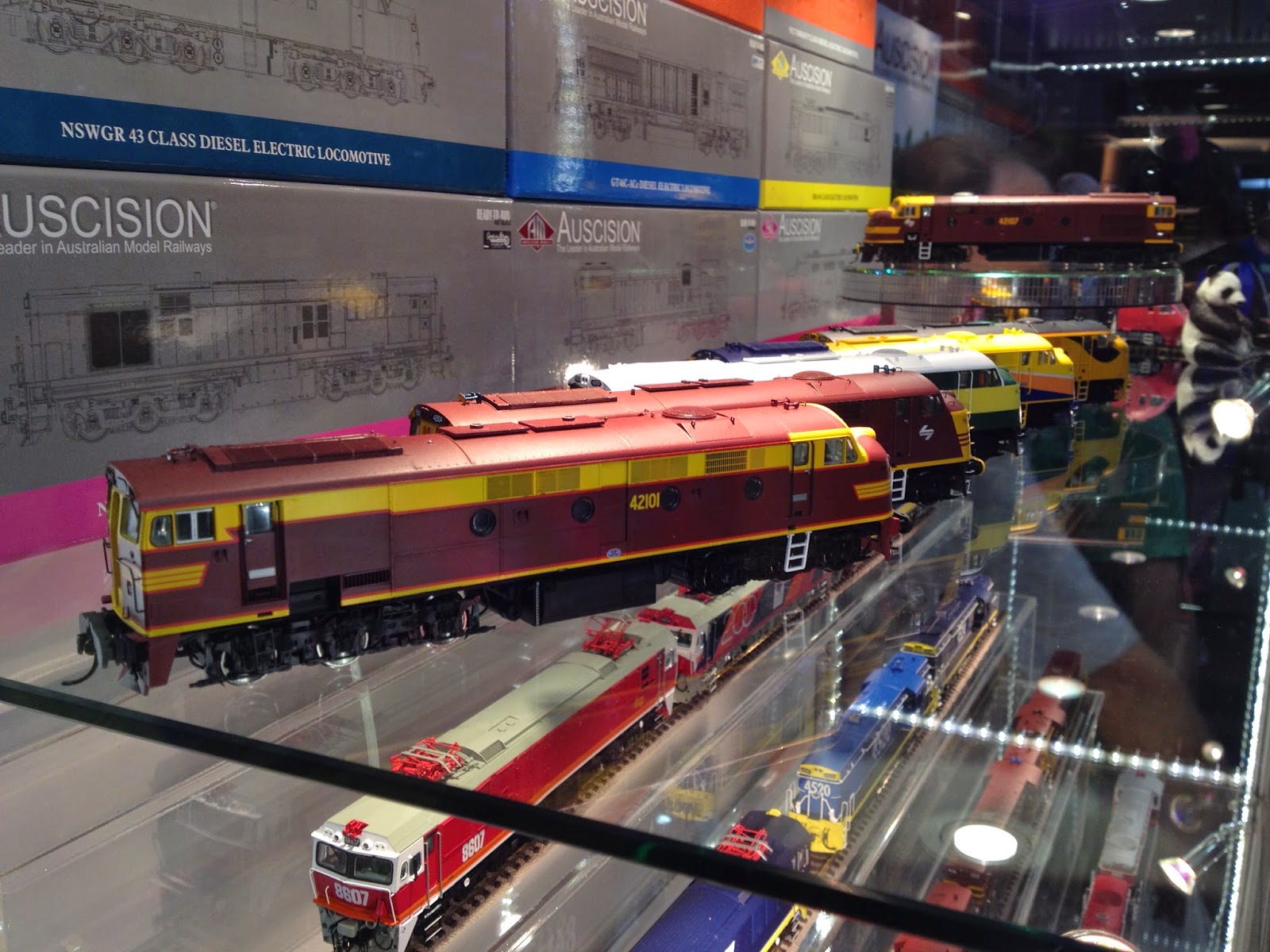 In addition to the WHX's my haul from the show was light at a pack of SDS's SRC containers, and a German-language magazine I annually hang out for from the Orient Express stand to refresh my language skills. The rest of the haul went to the family to be gifted at a later date during Christmas or birthdays, which will see the workbench will graced with a Silvermaz TRC kit to detail with an IDR underframe, and an IDR Castings OSF,

It was good to see a running sample of the Trainorama 48 on Geoff Small's 'Ashburn' too. As you would imagine with anything you paid for eight years ago, I spent a lot of time studying it as it towed a short mail train consist around. If you couldn't get to the show to see it, it looks like it won't disappoint. I've ordered an Auscision one recently too (with 165 in the class, you can never have too many!). Apparently the Auscision 46 was getting around on Ashburn later on the Saturday too.

Turning briefly to 1:1 scale, I left the exhibition after lunch for a wedding near Wollongong. I got changed at the Engadine Macca's, which is right next to the railway line. Going back to the car something loud and determined shot past in the cutting next door, heading south. As I was heading down that way anyway, I jumped in the car and headed to Stanwell Park station to see these 82's roll through. It was a nice end to the trains for the day. 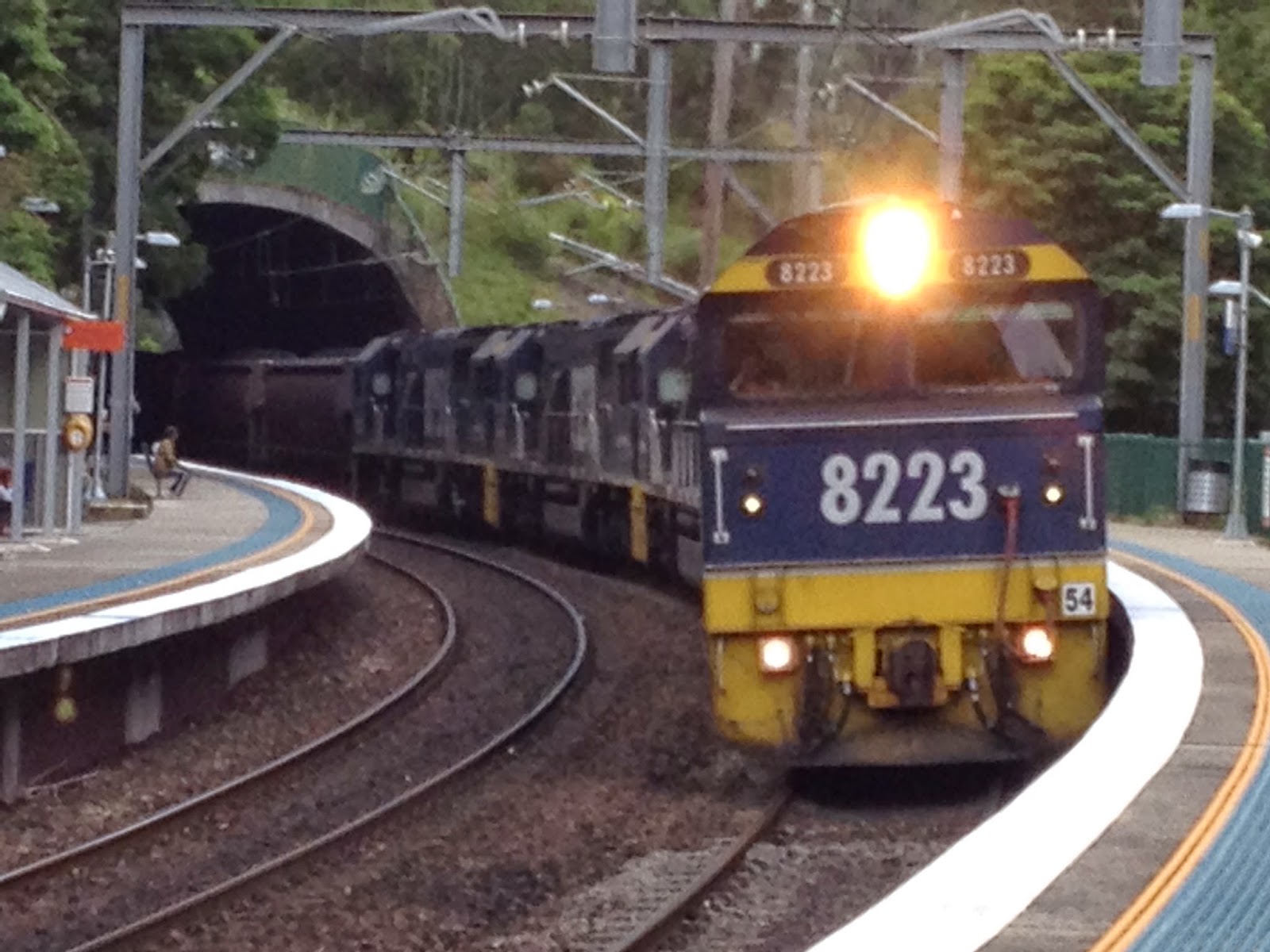 Back to the layout.

A few other bloggers have extolled the virtues of the Connect-It range of aluminium lengths and plastic connectors from Bunnings, so I picked up some over a few nights last week and built the legs to support the modules on Friday afternoon. 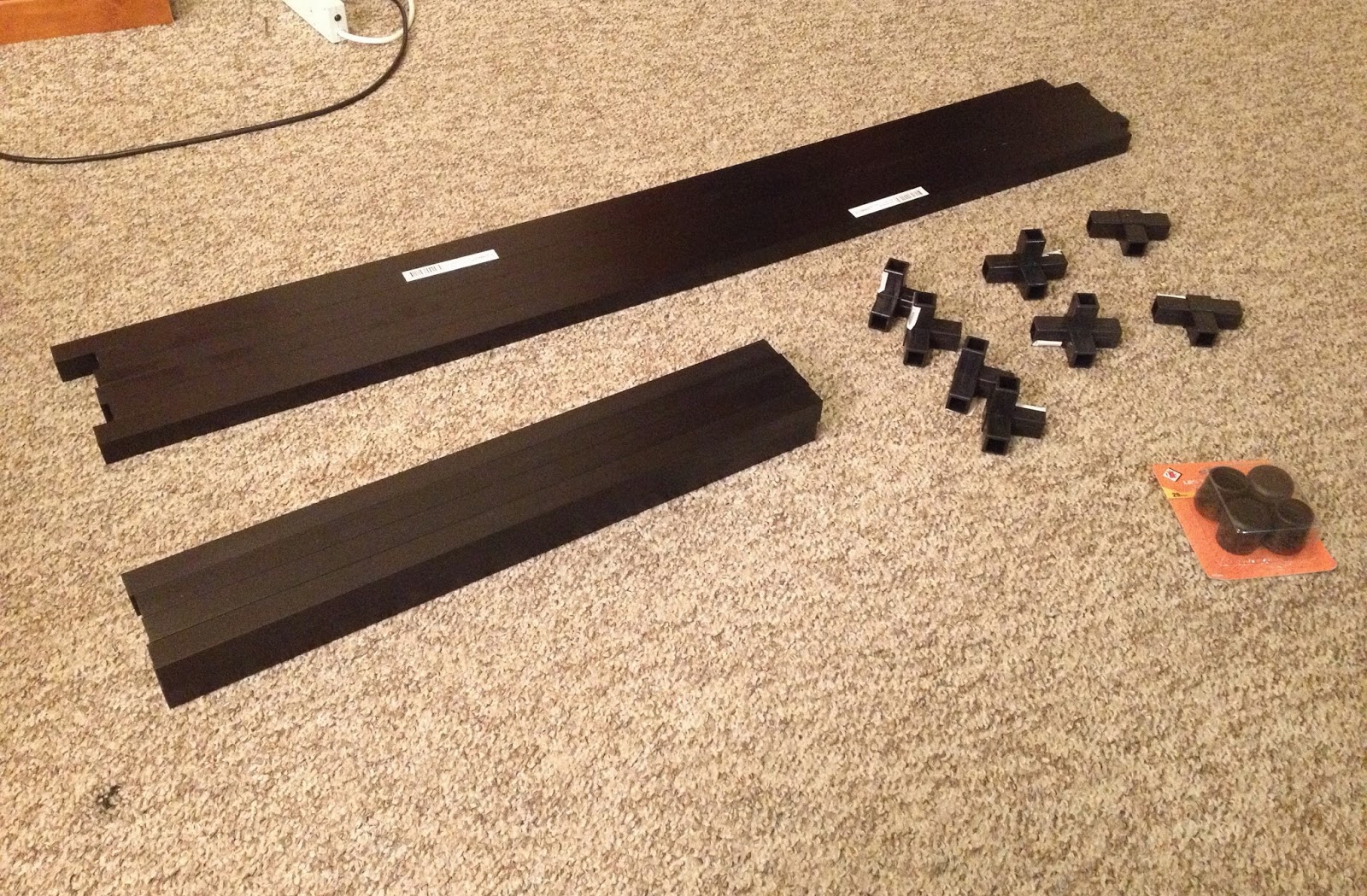 Aside from the light weight and strength, probably the biggest benefit is the speed with which you can knock together almost anything with these. I built the legs in less than an hour, probably closer to 40 minutes. 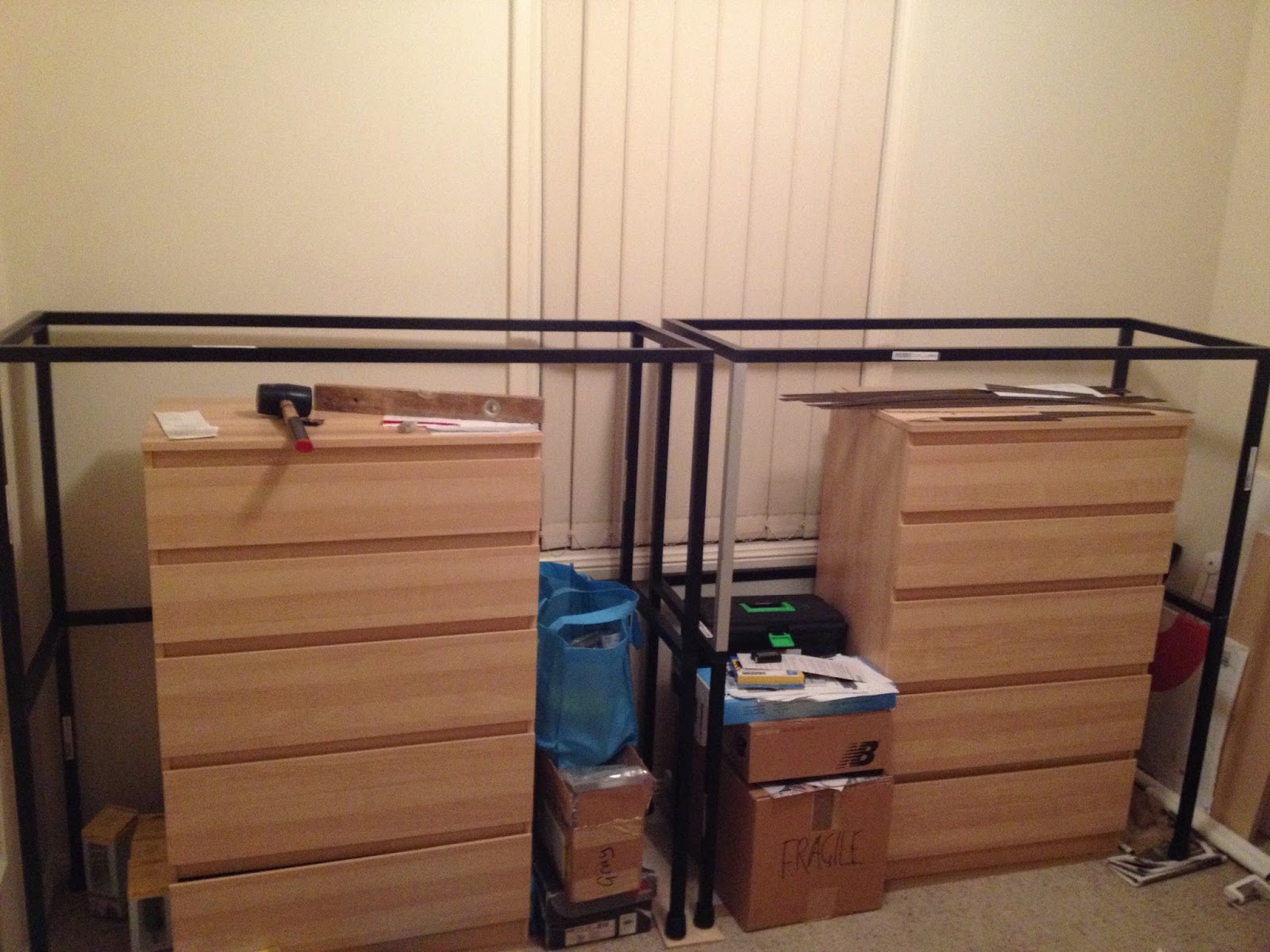 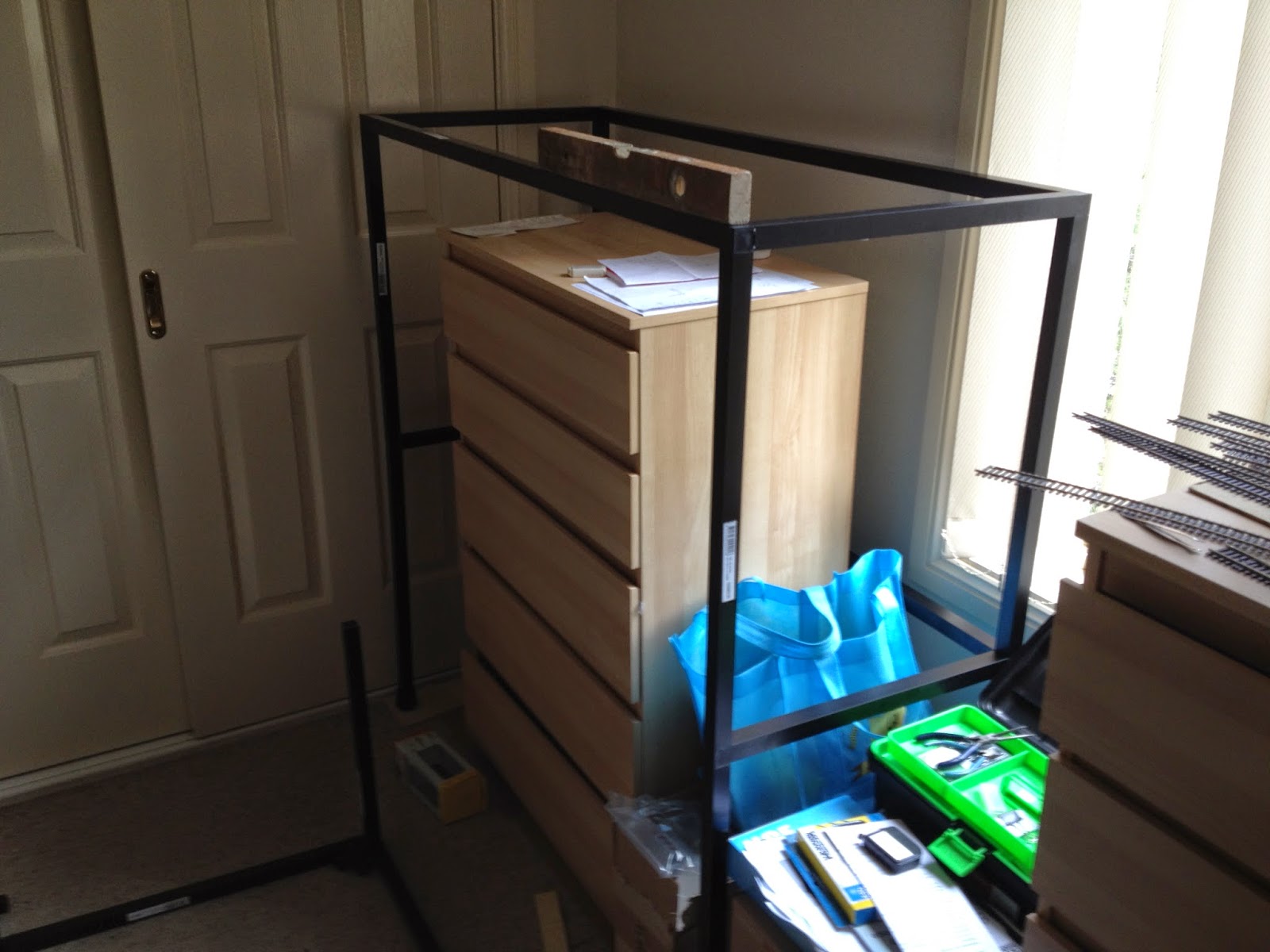 After that, my attention turned to carefully cutting the backdrop with a hobby knife and separating the module. For what is going to be a portable layout, the two modules had been bolted together since February. Separately them for the first time is kind of a big thing. Next, they were both moved upstairs with the help of my ever-patient partner. 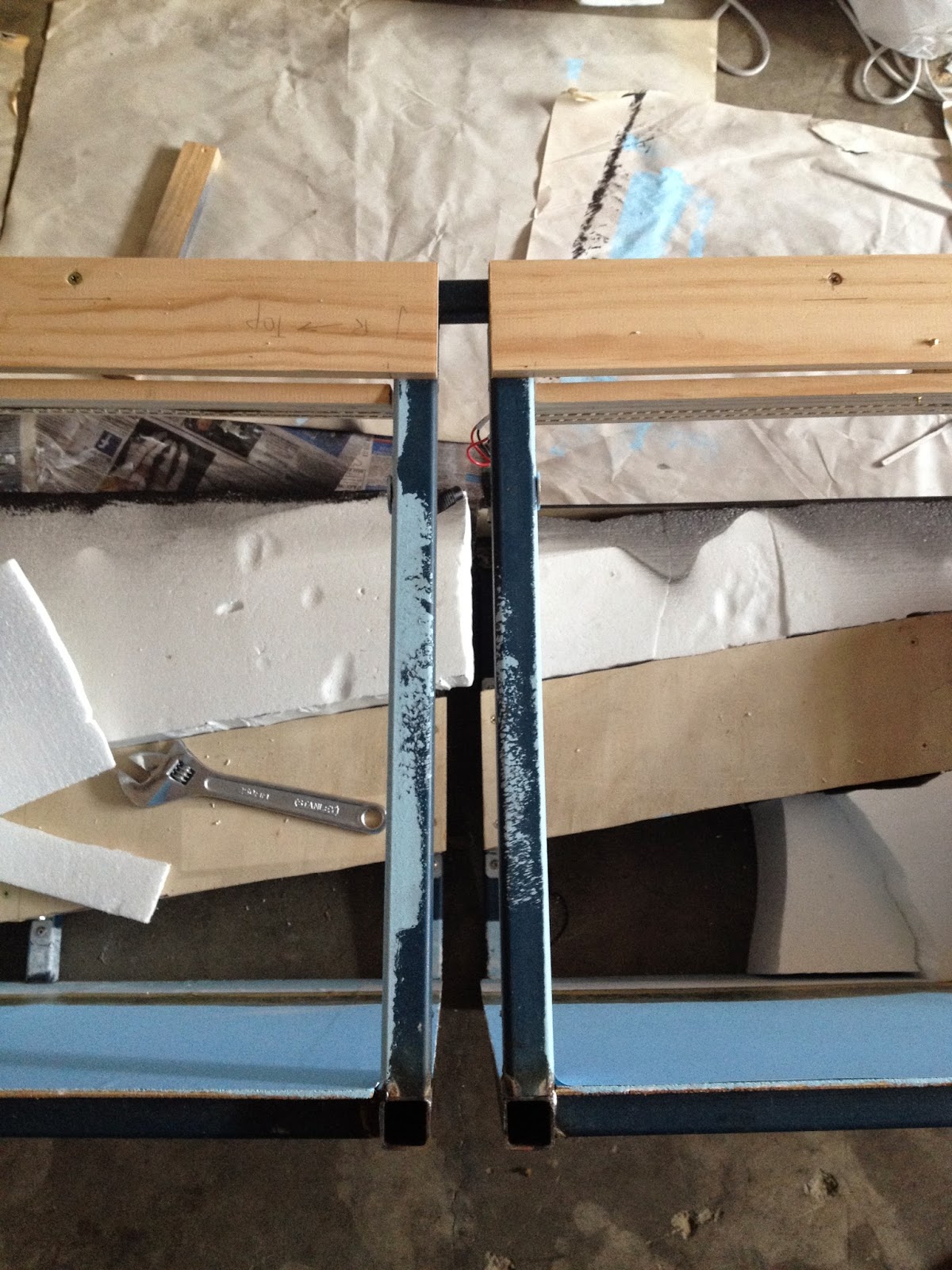 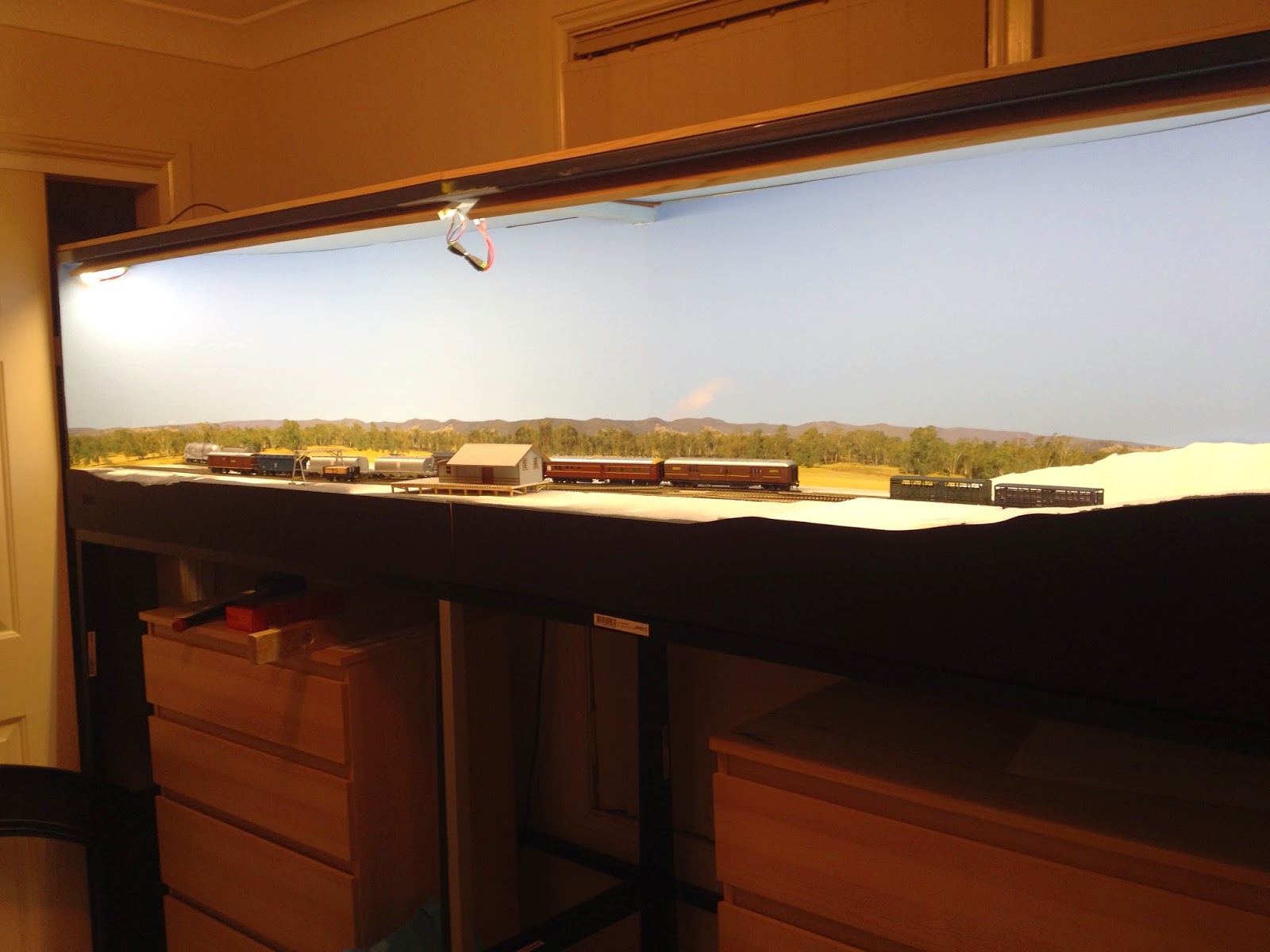 It feels encouraging to get to this point, so I got some track and rollingstock out to have another look with a little more done. The track boards appear to not be level on the left-module, despite being level when they were installed in the garage, so I'll need to have a play around with that before track can be laid. 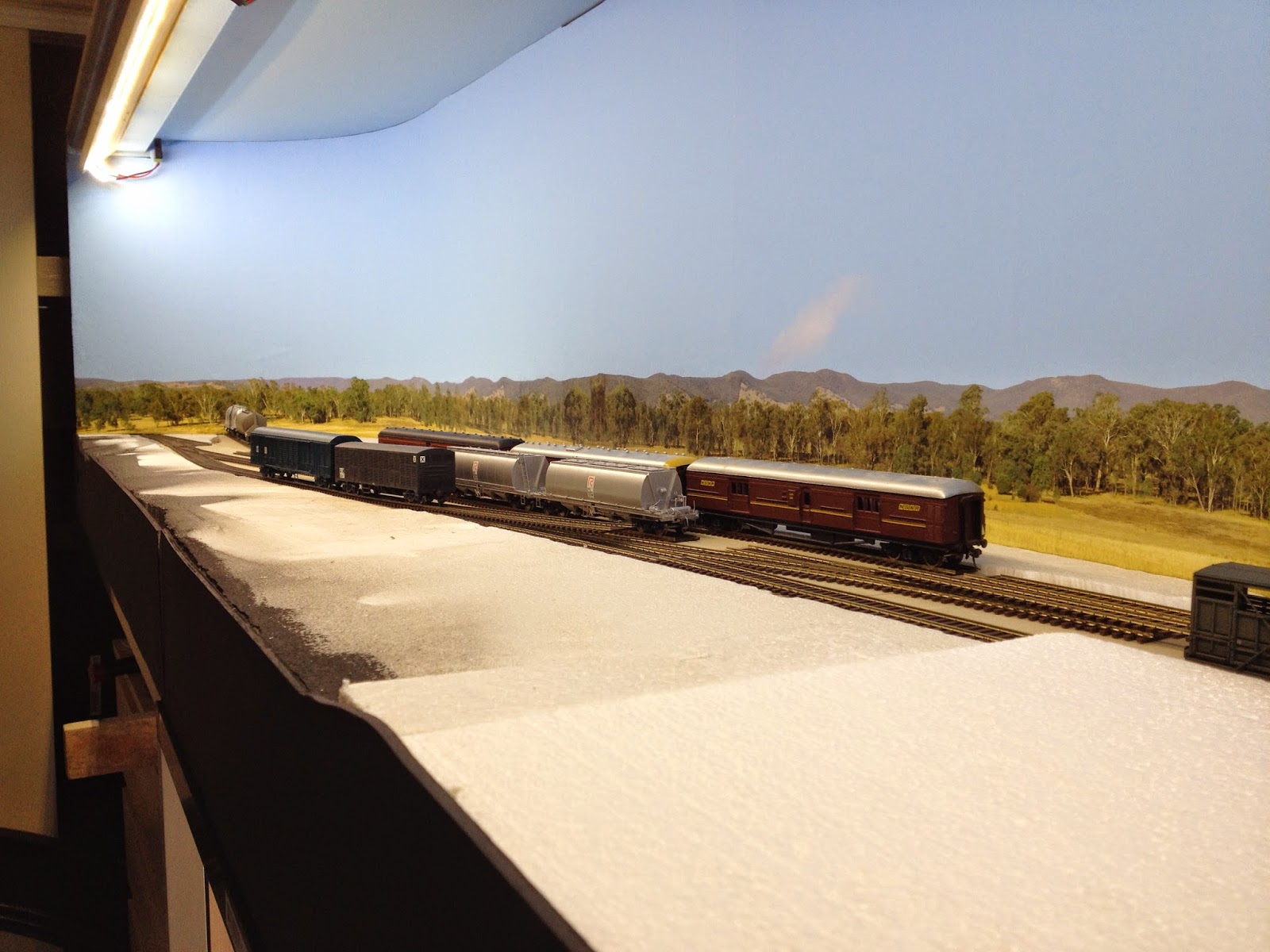 I started building the traverser module this afternoon before my interest in spending more time in the garage waned. It's something I will get to, however next up is fitting the pelmet and painting it. I wanted to keep that part off until everything was upstairs to allow for any adjusting if required, but so far it's looking ok to do later this week.

Until then, happy modelling!