Weathering an On Track Models GLX

When I started this blog last year the first photo I posted was a Bob Winch picture from 1979 of a short goods on the Oberon branch line. Even though it's the late 1970's, the van has been looked after well and the only signs of major weathering are on the bogies. This is a slightly different photo from the first one I posted, but it's the same train in the same location.

I wanted to achieve a similar, subtle weathering on an OTM GLX I have. It's also the only one I have, and the lowered lamp irons versions representative of my era are sold out. Pressure not to stuff it up! 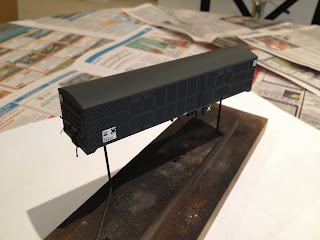 As the weathering was going to be subtle, I didn't need to undercoat it in the Krylon brown like the other wagons, so I removed the bogies and couplers and sprayed the body with Dullcote, letting that dry before applying the ground-up pastel powders. The methods were the same from this point as with the WHX's: apply pastels, spray with 100% isopropyl, wait a few minutes for it to dry, apply powders. Here is the van with the just the rust pastels applied to give you a comparison.

And with the rest of the pastels: 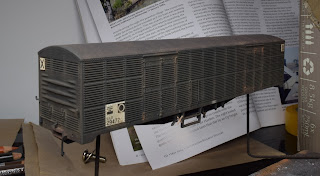 I toned down the dirt and rust on the body by going over it lightly with a dark grey to retain the cleaner look of a NSWGR wagon. Pretty happy with how it turned out, but the test will be getting it home and running it under the layout lighting.

Looking forward to getting to the cement wagons soon.