Getting back to it

Finally, uni's done and I have free time again. I've found myself at home today with a violent case of man flu, and little energy. A perfect day to put on the 17-hour version of SBS's slow TV 'The Ghan' and have a go at some 1:1 track planning.

Just briefly on 'The Ghan,' it's had mixed reviews and there seems to be few people who are middle-of-the-road about it. I actually find it quite relaxing. The idea of slow TV isn't to be something you sit rivetted to waiting for the next bolt of excitement, but instead something to have on in the background as a pleasant filler. Even though I'm doing other things with it trundling along, I'm not even halfway through and I find it difficult to turn off! Would be interesting to see if they could do the Indian Pacific, particularly for the driver's eye view of the section over the Blue Mountains. I digress... 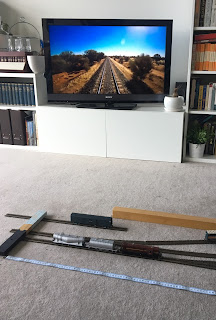 In my last post I talked about building another layout this year, and that I was keen for something where I could run some some electric stock, but particularly the V set interurban. What happened in just about every waking minute since December 2017 and today can be best explained thus: 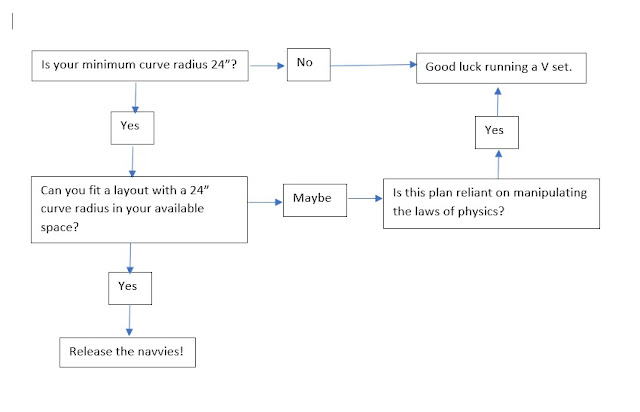 With a lack of space where I currently live, you can surmise where the answer consistently fell. ...Which is how I got onto designing another shelf layout. 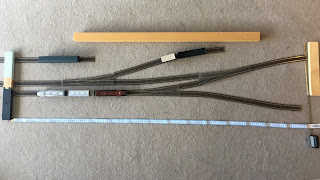 This one is roughly based on Sandown, NSW and would measure 1.5m by 0.4m, using Micro Engineering code 70 track. The bottom left would be a short, brick-faced platform for worker's trains, the top left would be a milk siding, then continuing clockwise around the photo, a loading shed, headshunt, and cement siding with a level crossing. The cement siding would extend into a small, fold-up pocket off the layout. The existing staging I have for Rozelle Street would attach to the left-hand side. All up it would give me an excuse to run passenger stock, a fresh canvas to try my hand at overhead wiring in a small space, somewhere to shunt, and more operations than my current layout.

One advantage Rozelle Street has over this design is in it's 'instant on' - where I can turn up and move a train around without having to drag out the staging and get wagons and locos out of their storage boxes. Clearly, this design doesn't meet that requirement. I may shrink the size even further to get a proper micro layout plan with self-contained staging, in a similar fashion to that of Chris Nevard's smaller designs. 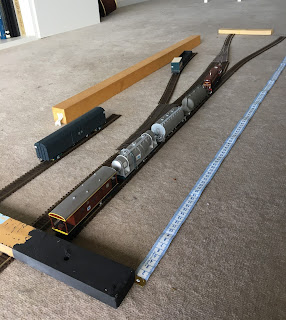 I did discover though that my Micro Engineering #6 turnouts' frog flangeway is too shallow for all of my locos (X200, 73, 48). Doing some research around the forums, I found that this is apparently normal for these turnouts but can be resolved by gently filing the frogs a bit deeper. I suppose I've been spoilt by Peco for so long, but it was a tad disappointing for what is heralded as the duck's guts of pre-manufactured turnouts.

On the actual modelling side, I've finally started to assemble MFA 2706. This is the one car I have most bits and pieces for and makes sense as the first cab off the rank. I've never been a fan of the Hawksmoor 72'6 car underframes due to one end always warping, so I may cannibalise a LIMA carriage for it's sturdier underframe. Eureka Models is releasing complete underframes with bogies from it's new 72'6 car run, however they will have four rows of truss rigging underneath, whereas this car has two. I suppose it's a case of how much effort I want to go to for the end result. More photos as the build continues.

Anyways, that's it for now.