I've been going to the Liverpool Exhibition with my brother and granddad for around 25 years this year, so it was nice to be able to do that again as a family this year. You never know how long you've got together, so it's nice to do something we enjoy.

Almost as soon as you walked in the door this year was this great little layout by IDR Models proprietor Ian Ratcliffe. I'm not sure of the curve radius off to the staging, but the whole main portion of layout can't be much bigger in length than Rozelle Street's 1.4 metres. It's good to see another small, Australian-prototype layout showing that you don't need a stack of space to have an interesting and entertaining layout. 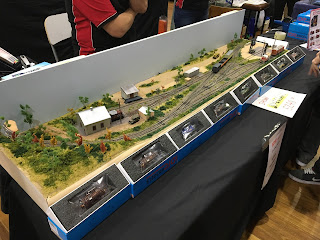 Although obligatory, a look in the Auscision cabinet didn't disappoint. I've opted for sound in my 48 class when it arrives, and I'm really looking forward to shunting with it. Delivery will be in late December or early January they reckon. 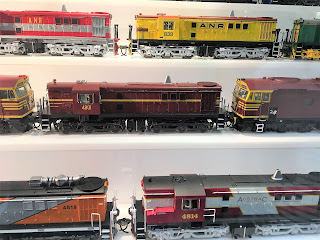 Geoff Small's "Mullet Creek" was back out again this year running around a lot more of the recently-released and modern rollingstock than in previous outings. Not being able to run my own V set in a continuous loop, you will completely understand when I say that I came back to this layout a few times on the day. 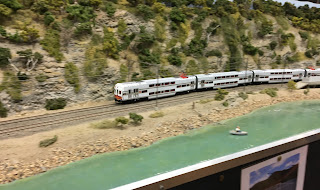 After the show I headed to my brother's place to help him with wiring up his layout. It's set in the mid-to-late 1960s and is based on a "what if" line over the Blue Mountains to the Central West and represents a mid-mountains junction station on that line, with a branch to Bilpin. Electrification ends to the west of the junction, so there's also a few engine change moves which allow for running steam, diesel and electric locos. Off to each side are 'city' and 'country staging yards, with the loop allowing for simply running a train around on those days when you just need to watch some wheels turn. After some fairly simple but time-consuming preparatory work, we had trains running by about 10.30pm. I'm looking forward to seeing this one evolve too, but that's another story. 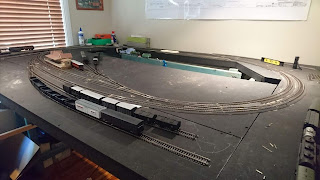 Back at home on the public holiday I played around with some weathering effects using a simple brown acrylic paint weathering wash. Below is the before and after on some RACE containers. By the late 70s these containers were both faded and dirty, which is a skill I need a little more practice on before I'm completely happy with it. Still, it's better than the out-of-the-box plastic look! 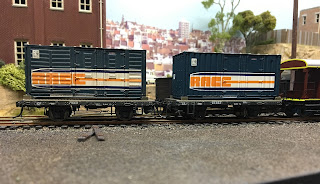 I also had a go at an SDS models LRC RACE container. By my era there was a definite orange hue to the weathering of these wagons, so I still need to play around with that one a little more. I'm fairly happy with the rain-soaked effect for now though. 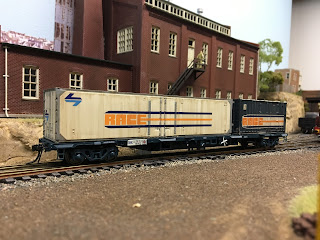 A bigger job on the cards is weathering up five FWHs to run with a few of the WHXs as a mill wheat train. I thought I'd experiment with this one first and add just a few coats of brown wash. In this instance I used an 80/20-ish mix of brown acrylic paint and isocol rubbing alcohol (rather than 100% isopropyl) without a dullcote layer sprayed on beforehand. I found that the paint mixture would start to mottle the model's original coat and create a streaking effect that I wasn't completely happy with. The phone camera photo below doesn't show it up particularly well, but I've left it for now to see what it looks like with fresh eyes this weekend. 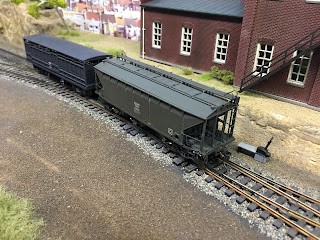 For now though, all of these little steps help build the overall scene to make a convincing model. 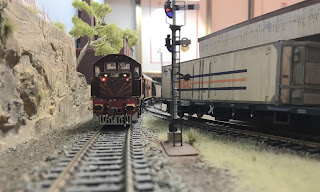