Preparation for the next exhibition

I received confirmation yesterday that Rozelle Street has been accepted into the Malkara Model Railway Exhibition in the ACT. In between when I applied to exhibit earlier this year and now my work schedule has changed, meaning that I'm going to be away a fair bit more than I had been expecting. Much like the last time I exhibited, it's going to be a series of condensed modelling weekends between now and August!

I'll save the photos of the smaller details I'm adding until after the exhibition, but for now one of things holding my attention recently has been the SDS models' JHG. Aside from being a fantastic, highly detailed model of the most modern of the 'caboose' style guard's vans on the NSWR, it also comes with working marker lights. These are controlled by a tiny (and I mean tiny - I had to gently use needle-nosed pliers), directional switch underneath the model behind the battery boxes. I appreciate the size because it is completely unnoticeable on the vehicle when viewed from either side at track height, even at the slow speeds I use for shunting on the layout. I'll probably run trains without the marker lights for the most part because you need to physically pick up the vehicle to change their direction. Still, a neat addition and probably a sign of where standards will go for future guard's van releases by the various manufacturers. 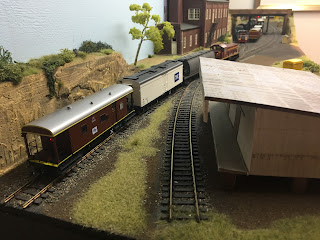 I also recently took advantage of the Auscision 86 class re-run to pick one up for myself. Much like the SDS models' 81 class I have on the way, this isn't a sign of a blog or era name change. I just like these locos and the Candy scheme is as close as I can get to my era without looking out of place. One of the layout ideas I have for the future is a Blue Mountains-themed line, and should I ever want to go down this path I figured it'd be easier to get the loco now than trying to hunt one down on eBay without paying through the roof for it. And hey, if that doesn't happen, eBay is where it will end up and I'm sure there will be a market for it. 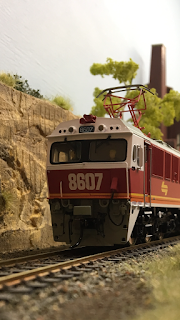 I'm conscious of not having many "how to" posts recently, so I'm planning to use the next few months' worth of smaller jobs to provide some newer content in that regard. Until then it's going to be a little bland here.

Anyway, if you're going, look out for Rozelle Street at the Malkara exhibition and come and say g'day. It's always good to put a face to a name.