As I don't belong to a club I normally can't go to an exhibition without taking my own layout, much less turn up to run trains for just one day. As a solo modeller this makes it hard to block out an entire weekend more than once per year, let alone a long weekend. Last weekend, I got one a rare opportunity to run trains with minimal effort on my part.

One of the ways I stay connected to and inspired by other modellers is through a Facebook group called New South Wales Railways Diesel Era Modelling (NSWRDEM) or just DEM for short. The group focusses on the period between about 1975 and privatisation in the early 2000s on NSW railways. The Epping Model Railway club very kindly allowed our group to run our models on their Binalong layout for the whole weekend. All up this required about 15 or so operators over the three days. As I could only commit for the Sunday, contributing as part of a bigger group suited me well. 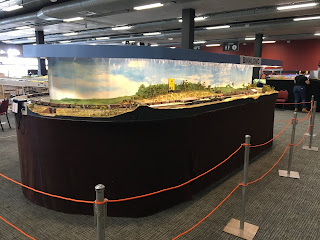 Stock had to be weathered or modified or kitbashed - i.e. no plonking! While there's a place for ridiculous consists - a tuscan-liveried XP power car hauling freight on the metro goods lines for example - it was nice to have a serious collection of models running in the one spot. Aside from 42106, I weathered three wagons specifically for this exhibition, and I'll do a post specifically about them at a later date. 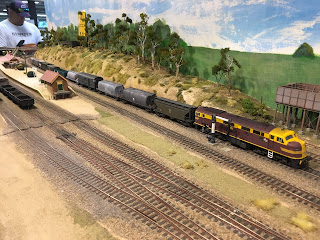 After the first few laps running the consist around I found that the CKF bounced around too much going over joins in the fiddle yard and so it was taken off. This is something I don't experience on my shelf layout at low speeds. The EMRC has a rule that you take a troublesome wagon off to fix it and if it still doesn't work you pack it away. Smart rule. 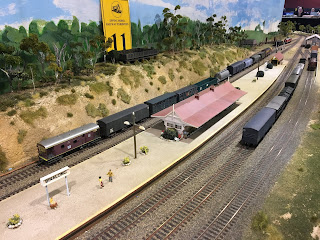 Later I added one of SDS models' new 10,000 gallon tankers to the consist, and despite it being unweathered it fit in reasonably well. 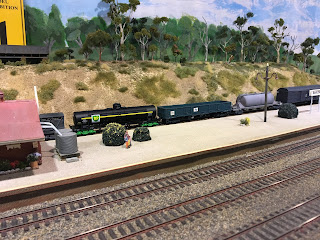 I was really happy with how 42106 ran too, given that I didn't have anywhere to test run it after weathering. 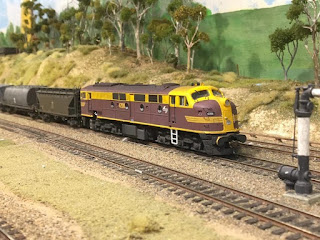 It might be personal preference, but most of the modellers had freight stock rather than passenger. Perhaps freight stuff is more versatile across a variety of layouts, doesn't take up as much space and fits in just about everywhere on a railway. And yes, I am still planning on building the MUB set. All in good time.

Stepping aside from the NSW theme briefly, Murray Bridge had travelled all the way from SA to be at the exhibition too and was spectacular to watch. A combination of detailed and weathered locos and rollingstock passing through the scene at realistic speeds make this an exceptional layout and one you really need to see in the flesh to properly appreciate. An absolute credit to you Scott. 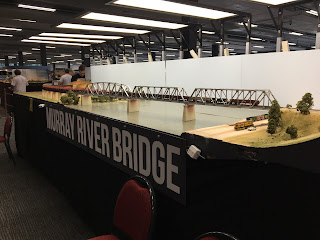 In chatting to him, I joked that Scott had added an operational inglenook cameo on the river flat. Turns out it actually does operate, which is a great touch. 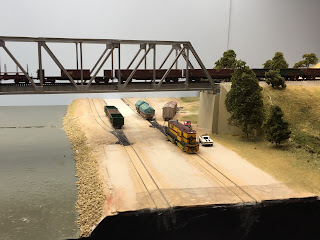 Speaking of Inglenooks - Gary Ruming's new Tomlin's Creek layout made it's debut at Rosehill too and looks outstanding. 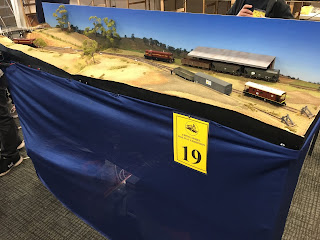 The new venue at Rosehill Racecourse was the most comfortable I've been in for an exhibition too; no draughty winds, not too hot or cold despite having a huge wall open to the elements, and with plenty of space away from the exhibits to sit down and eat. As much as I enjoy the Liverpool exhibition, I don't enjoy having to Genghis Khan half a table just to sit down when I want to have lunch.

Straight after the exhibition I headed overseas with work and it'll be a while before I get more time for layout building and modelling. Seeing the layouts, running trains and chatting to various model railway friends old and new was refreshing given the bulk of my interactions are online. I've taken a few ideas away and the exhibition has spurred on some creative juices. I've recently revised the track plan for Chullora Industrial and so when I get a break again I'll post both an update on that and some further detail on the wagons I weathered for this weekend too.

In the meantime, happy modelling!