As the title suggests, I made it to the Hobson's Bay Model Railway Club exhibition! After my last post I had to go away with work for about five weeks, plus other adulting, all of which ate into my modelling time. In the week leading up to the show I was up until midnight just about every night, and received my 73 class back from being professionally converted to DCC and sound on the Monday before the show. It really came down to the wire as I finished the layout about 10 minutes before the exhibition opened on Saturday, with the fitting of the chimney to the factory.

But, voila! It's done!
Below are some photos of the finished "Rozelle Street" on the day: 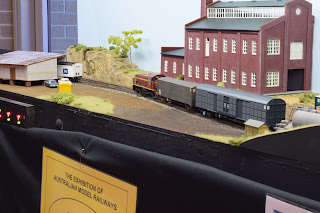 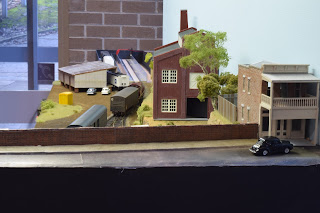 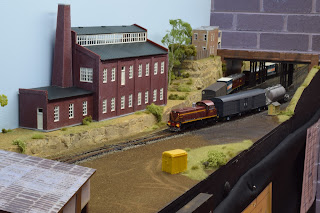 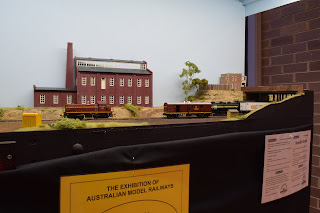 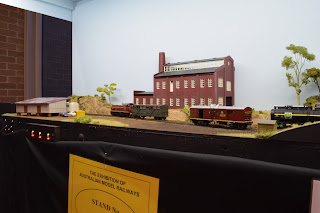 Exhibiting is certainly a new experience and much more enjoyable than I was thinking it would be. My brother came down from country NSW to help me set it up and run it on the Saturday, and I ran it solo after he had to head back for work. Although it's only a small layout, I could not have done without that second set of hands for set up, and to free me up to chat to the crowds and put the finishing touches on detail items. It's rewarding chatting to someone for a while and seeing the 'lightbulb' moment when the realisation hits of how achievable something similar would be in their space, with their trains, running through scenery relevant to their prototype. One bloke asked if I got bored running something this size. It's essentially running your trains for two days straight and it's amazing how quickly that time goes, even on this layout.I met a couple of readers of this blog too which was great. Overall it was a really positive environment.

No model railway is ever finished, but with the previous layout in Sydney not getting this far it's rewarding to be at a stage where the bulk of the scenery and buildings are done. Although I'll do more weathering and scenic details from here, I can come home after work and just run it. I'm really looking forward to that.

I mentioned a few posts ago that I built the layout to enter in the new Oz-32 competition. After the other entrants pulled out due to concerns for not being able to finish in time for July, I ended up being the only entrant. Talk about Steven Bradbury! For me, the competition side of things was my way of being accountable to someone to actually finish a layout to an exhibition standard, to then take it home and use as a home layout. It was quite generous of the Hobsons Bay Club to award me first prize and the associated prize money given the circumstances, and I'm quite humbled by it. Here's the blurb the club put up on the layout for me: 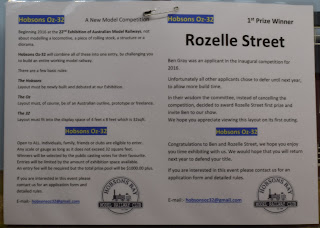 The production manager for the Australian Model Railway Magazine came by and took photos of it on the Sunday for publication in the magazine in future, so that was a nice accolade too. Look out for that one later this year!

I'm going to upload a few retrospective posts over the next few weeks about installing the turnout servo's, the scenery and a few of the other details. Until then, I'm looking forward to notching back and coasting for a while.